The Montessori Method is a child-centered, alternative educational method based on the child development theories originated by, Italian educator and doctor, Maria Montessori in the late nineteenth and early twentieth centuries. This method of education is characterized by emphasizing self-directed activity, on the part of the child, and clinical observation, on the part of the teacher.

The Montessori Method is based on:

Dr. Montessori observed that in the first six years of life a child possesses an “absorbent mind”. The mind is like a sponge absorbing knowledge quickly and effortlessly, from the experiences in his environment. It is the period in the child’s development that forms the foundation for later intellectual and psychological development. Today, neuroscientists call her observation “brain plasticity”.

Another observation of Dr. Montessori, which has been reinforced by modern research, is the importance of the sensitive periods for early learning. These are critical periods of intense fascination for learning a particular characteristic or skill, such as putting things in order, counting or reading. It is easier for the child to learn a particular skill during the corresponding sensitive period than at any other time in his life. The Montessori classroom takes advantage of this fact by allowing the child freedom to select activities which correspond to their own period of interest.

These periods are temporary. Once they pass they never return. This doesn’t mean that a child will never learn that skill, but learning after the sensitive period has passed will always be less easy.

The Montessori classroom is commonly referred to as the “prepared environment”. This name reflects the care and attention that is given to creating a learning environment that will reinforce the children’s intellectual development and independence. In a Montessori classroom children are free to move about the classroom choosing work of their own choice and work at their own pace. They work with materials that are multi-sensory, sequential and self-correcting. As children use the materials over and over, they gradually build an in-depth understanding of the concepts and they are ready for the next level of work. The materials are designed to foster independence, develop a healthy self-concept, encourage thinking and provide an appreciation of nature and the world. The prepared environment includes the following five areas: Practical Life, Sensorial, Language, Mathematics and Culture.

The Montessori teacher, called a “Directress”, plays a very different role from traditionally trained teachers. The Montessori teacher’s role is that of facilitator and guide. She is a very good observer of individual interests and needs of each child, and her daily work proceeds from her observations. She is trained to recognize periods of readiness and encourages active, self-directed learning helping children move toward independence.

The child’s development of personality and social behavior is an essential aspect of Montessori education. Grace and courtesy lessons are a daily part of the Montessori curriculum. Children learn manners, respect for the environment and for others.

They also develop a sense of community and an eagerness to learn. When a child’s desire for concentrated work is satisfied, he appears more calm, content and responsible. This is what Maria Montessori referred to as “normalized”. Montessori’s unique focus on the development of each person as a complete human being provides a strong foundation for success in all areas of life. 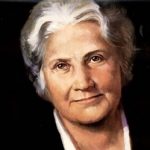 Maria Montessori was born in 1870 in Chiaravalle, Italy. In 1896 Maria Montessori became the first woman physician in Italy. Her interest in children and education led her to open a children’s school in 1906 in the slums outside Rome. She saw the children’s almost effortless ability to absorb knowledge from their surroundings, as well as their tireless interest in manipulating materials. Every piece of equipment, every exercise, every lesson that was developed by Dr. Montessori was based on what she observed children to do “naturally” by themselves and unassisted by adults. Montessori put into practice her theory that children have a natural “tendency towards elevation,” and created an environment for self-education and self-realization, with remarkable success. She became internationally famous and schools using the Montessori Method now exist all over the world.

“The child has one intuitive aim: self-development. He wants to do and see and learn for himself, through his or her senses and not through the eyes of an adult.”- Dr. Maria Montessori